Denis de Rougemont; was an intellectual leader among world citizens often walking on uncharted paths.  A French-speaking Swiss; after his studies of literature at the University of Geneva; at 25, he moved to Paris where he quickly became part of a group of young; unorthodox thinkers who were developing a “Personalist” philosophy.

The Personalists around Emmanuel Mounier, Alexandre Marc, Robert Aron and Arnaud Dandieu were trying to develop an approach based on the ‘Person’ to counter the strong intellectual currents of communism and fascism; then at their height in European society. (1)  De Rougemont was one of the writers of the 1931; Manifesto of the New Order; with its emphasis on developing a new cultural base for society.

The Powers of the State.

For de Rougemont; revolutionaries attempting to seize power; even from the most repressive regimes; invariably fall into the power structures; they hoped to eliminate.  Only the power we have over ourselves is synonymous with freedom.  For the first time; the person has not only the need; but also the power and ability to choose his future.

He wrote; “The powers of the State are in direct proportion to the inertia of the citizens.  The State will be tempted to abuse them; as soon as it thinks there are signs that the citizens are secretly tempted; to let themselves slide back into the conditions of subjects…Dictatorship requires no imagination: all we have to do is to allow ourselves to slide.  But the survival of mankind in an atmosphere; we can breath presupposes the glimpsed vision of happiness to be achieved; a ridge to be crossed; a horizon.

“ The model of society; which Napoleon established by a stroke of genius with a view to war and nothing else; is the permanent state of emergency; which was to be the formula of the totalitarian states from 1930 onward. Everything is militarized; that is, capable of being mobilized at any time, spirit, body and goods.”

In 1935; De Rougemont lived in Germany as a university lecturer in Frankfurt.  There he was able to see the Nazi movement; at first hand and had seen Hitler speaking to crowds. He later wrote of this experience. “The greatest theologian of our time, Karl Barth wrote:

“A prophet has no biography; he rises and falls with his mission.”

This may be said of Hitler; the anti-prophet of our time, the prophet of an empty power, of a dead past, of a total catastrophe; whose agent he was to become.  Hitler; better than orthodox  Communists, Fascists, Falangists and Maoists; answered the basic question of the century; (which is religious in the primary sociological sense of rebinding) by offering a comradeship, a togetherness, rituals, from the beat of drums by night, and by day to the sacred ceremonies of Nuremberg.”

One of de Rougemont’s early essays was “Principes d’une politique de pessimisme active”. He and those around him saw the dangers and the opportunities; but were unable to draw together a large enough group of people to change the course of events.  As he wrote “From the early thirties of this century; young people who were awakened; but without ‘resources’ were laying the foundations of the personalist movement.  They knew that the totalitarians were going to win — at least for a tragic season — and tried to put into words the reasons for their refusal; in the face of this short-lived triumph.”

In 1939, he published his most widely read book Love in the Western World (L’Amour et l’Occident) where he traced the idea of romantic love from the Manichaeins, through theBogomiles, to the Cathari to the poetry of the troubadours.

During the war years, he lived in the USA writing and broadcasting on the French section of the Voice of America. In 1946 he returned to Europe, living most of the rest of his life near Geneva.

There he became highly active in the movement for European federalism, but he was critical of the concepts of a European Union as integration of existing States; He remained loyal to the position he set out in the mid-1930s. “Man is not made on the scale of the huge conglomerates which one tries to foist on him as ‘his fatherland’; they are far too large or too little for him.  Too little, if one seeks to confine his spiritual horizons to the frontiers of the Nation-State; too large if one tries to make them the locus of this direct contact with the flesh and with the earth which is necessary to Man”.

He put an emphasis on culture stressing a common European civilization but with great respect for the contributions of different European regions.  His idea of federalism was to build on existing regions, especially trans-frontier regions.  He was an active defender of ecological causes, seeing in the destruction of nature one of the marks of the over-centralization of State power.

Thus he was stringing against the nuclear power industry which he saw as leading to State centralism.  As he wrote:

“Starting afresh means building a new parallel society, a society whose formulae will not be imposed on us from above, will not come down to us from a capital city, but will on the contrary be improvised and invented on the plane of everyday decision-making and will be ordered in accordance with the desire for liberty which alone unites us when it is the objective of each and all.”

Featured Image: Portrait of Leo Tolstoy (1887). By Ilya Repin, Public domain, via Wikimedia Commons. “We possess a single infallible guide, the Universal Spirit that lives in men as a… 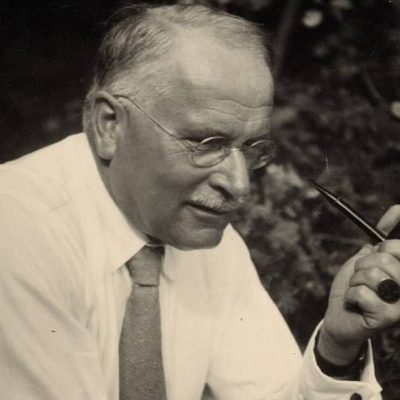 Carl.G. Jung (26 July 1875 – 6 June 1961) was born in Kesswil on the Lake of Constance; where the three countries that most influenced him met: Switzerland, Austria, and…