Wystan Hugh Auden, is appreciated as a bridge builder by two separate groups of poetry readers.  Each group celebrates half of his poetic life and rather tries to forget about the other half; seeing one part of his life as the perfect image of the modern poet; who then lost his way. There is the W.H. Auden (he rarely used his first names) of the 1930s; the English political poet who reported on the Spanish civil war and the start of the Sino-Japanese war in 1939.  Then; there is the poet living in the USA during the 1940s; who became a US citizen and became primarily concerned with what was called at the time “neo-orthodox Protestant” theology.

Finally there is a third phase of his life;  the writer largely of book reviews and short literary essays living much of the time in Italy and Austria until his death in 1973 in Vienna.  The one constant aspect running through his life and coloring his more personal writings was a homosexual bonding to men that he hoped would last and never did; as reflected in his poem  It’s No Use raising a Shout:

It’s no use raising a shout.

No, Honey, you can cut that right out.

I don’t want any more hugs;

Make me some fresh tea.

In 1930; shortly after publishing his first book of poems; he went to live in Berlin.  The Berlin of Weimar Germany was more tolerant of open homosexuality than was the England of his youth.  In Berlin; he began an intensive literary and on-again-off-again sexual relationship with Christopher Isherwood (1904-1986). The two men had known each other slightly at Oxford University.  The somewhat older Isherwood was already well introduced in the English publishing and art world.  He helped Auden with introductions to editors.  It was T.S. Eliot’s publisher Faber & Faber which published Auden on Eliot’s recommendation; even if Eliot’s conservative religious and political positions were the opposite of Auden’s .

In Berlin; W.H. Auden and Isherwood became aware of social unrest and the clash between the Communists and the rising Nazi party.  W.H. Auden  became a Marxist because Marxism provided a ready-made structure to explain conflict.  All his life Auden was interested in developing frameworks to interpret social and religious categories; and the Marxist dialectic was both a philosophy of history and a structure to understand current events.  Auden, however; was never attracted to the political parties that were the manifestations of Marxist views. 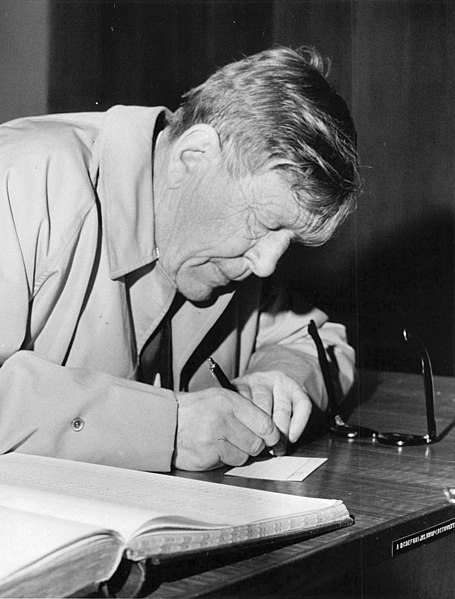 The despotic rule of the educated classes.

With Isherwood; W.H. Auden wrote a number of verse plays that combined humor, irony with the issues of the day.  It was a socially-conscious art; but they never departed from a certain ironic tone and a concern with language.  Auden was always concerned with the impact of words; and his poems were usually clear and in a conversational style.  He could recognize the importance of style and the use of words of other poets such as Yeats.

In the 1930s; confronted with social unrest, William Butler Yeats moved increasingly to the Right even urging “the despotic rule of the educated classes”.  In 1933; Yeats was for a short time drawn towards General O’Duffy, leader of the Irish Fascists — the Blue Shirts.  Fortunately;  O’Duffy was a clown from whom Yeats separated quickly;  but not from some of O’Duffy’s ‘law and order’ ideas.  Thus;  although Yeats had become an opponent of Auden’s values;  Auden’s tribute to Yeats on his death in 1939 is one of the most moving and just.

“ But there is one field in which the poet is a man of action, the field of language, and it is precisely in this that the greatness of the deceased is most obviously shown.  However false or undemocratic his ideas,  his diction shows a continuous evolution toward what one might call the true democratic style.  The social virtues of real democracy are brotherhood and intelligence, and the parallel linguistic virtues are strength and clarity, virtues which appear even more clearly through successive volumes by the deceased.”

Journey to a War.

When the Spanish civil war broke out; W.H. Auden was immediately drawn to the Republican cause.  He went to Spain thinking of becoming an ambulance driver.  However; his literary talents were more needed in the information and propaganda services.  In Spain; he saw that the political realities were more ambiguous and troubling than he thought; but he saw that war was ready to expand.  He also saw the link between events in Europe and Asia.  In 1938; Auden and Isherwood went to China to cover the Sino-Japanese conflict and jointly wrote a powerful account Journey to a War.

On their way back by boat from China; Auden and Isherwood decided to stay in the USA.  Auden in New Year Letter reviews the political decade in which he had been the leading poetry voice of the Left:

Who, thinking of the last ten years

Does not hear howling in his ears

The Asiatic cry of pain

The shots of executing Spain

See stumbling through his outraged mind

Of the Danubian despair

The Jew wrecked in the German cell,

Once in the USA; the Auden-Isherwood couple broke. Auden wrote:

If equal affection cannot be

Let the more loving one be me.

Isherwood moved to California and became part of the religious-mystical circle around Aldous Huxley and Gerald Heard.  Isherwood became a cultural bridge builder toward India and Indian thought. He  became a disciple of the Indian teacher Swami Prabhavananda; and cooperated in the translations of a number of Indian religious texts.  Later Isherwood’s memories of Berlin Goodbye to Berlin served as the basis of plays and films. 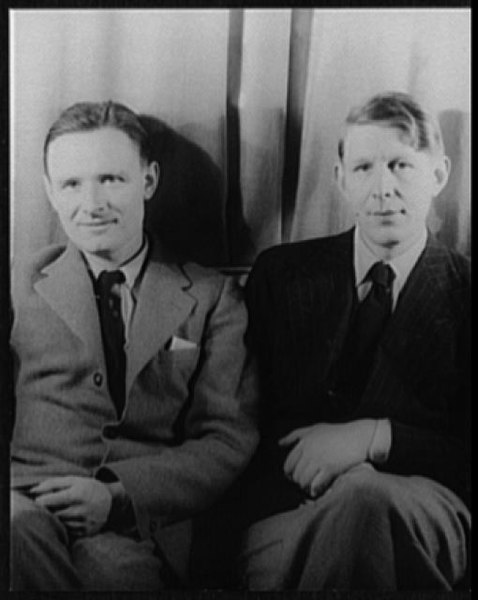 Meanwhile; W.H. Auden stayed on the East Coast, first teaching at Swarthmore, a Quaker college near Philadelphia from 1942-45; he then lived in New York City in the literary fashionable St Marks Place.  He began writing for US journals; in particular The New Yorker and Vogue both of which paid well so that he could write without having to have a regular teaching job; though he was often asked to give lectures at universities.  Auden became increasingly influenced by the Protestant theologian and political analyst Reinhold Niebuhr;  who was teaching in New York City.

Niebuhr combined a socialist-leaning politics with a Protestant theology; which stressed that humans were always limited in their ability to do good by the reality of sin; which is self-centeredness.  In the Niebuhr spirit, Auden wrote :

“ Man is not, as the romantics imagined, good by nature.  Men are equal not in their capacities and virtues but in their natural bias toward evil.  No individual or class therefore can claim an absolute right to impose its view of good upon them.  Government must be democratic, the people must have a right to make their own mistakes and to suffer for them.”

In New York; Auden entered into a long-term literary and homosexual relationship with Chester Kallman; a younger poet and writer.  The two together began writing opera libretti for the English composer Benjamin Britten; who also spent the war years in the USA.  They wrote together the words for Britten’s opera Paul Bunyan – a folk hero that Britten used to deal with his newly-discovered American themes; as well as the words for many of Britten’s song cycles.  Kallman and Auden wrote Rake’s Progress for Igor Stravinsky; who had also moved to the USA as well as an opera of Hans Henze based on The Bacchae of Euripides.

To mark the war years and the start of the Cold War; Auden wrote The Age of Anxiety which won the Pulitzer Prize for poetry in 1947.  While the book was not that widely read; the title gave its name to a whole period and sections of it were often quoted.

By 1948; Auden was again attracted to life in Europe; but largely places that were not associated in his mind with his experiences of the 1930s.  He spent part of each year in Italy and later both Italy and Austria.  He returned to Oxford University to give some lectures on poetry but post-war England held out few attractions for him.  Although he continued writing book reviews and short essays, his declining years never caught the spirit of the times as did his 1930s poems and his 1947 Age of Anxiety.  Nevertheless, he is a prime example of the cultural bridge builder, reacting to political events in societies outside his own but seeing how these political and cultural events have an impact on the wider society.