Featured Picture: Wroclaw, Poland: the memorial of 10th anniversary (1999) of Tian’anmen Sq. (Beijing, China) massacre, June 4th, 1989 The first version of this memorial was “erected” by Polish students a day after the massacre, June 5th 1989 – as a destroyed bicycle and a fragment of tank-track lying nearby. The version in the photograph was erected ten years later, in 1999, and the symbolism is identical: bicycles against tanks… Photo by Julo, Public domain.

The uprising of Chinese students, soon joined by workers, peasants, and those who called themselves shimin (citizens) started a new era of « reform from below » with the symbol of the Goddess of Democracy. Students from colleges and universities in China’s capital initiated protests after the death on 15 April 1989 of the former General Secretary of the Communist Party, the reformist Hu Yaobang. The movement then spread over a number of weeks to other major cities such as Chengdu, Xian and Changsha.

The students made numerous demands for reforms : among them were calls for an end to corruption in government, increased funding for education, greater freedom of expression, and increased democratic participation in decision-making which was already being put into practice within student organizations. On 4 May 1989, these student-led demands were structured into a written text and read out in Tiananmen Square. Intellectuals approved of the text and made the demands of reform their own.

We have made this statue as a memorial to democracy.

The protests took place against the background of a meeting between the Soviet leader Mikhail Gorbachev and the Chinese leader Deng Xiaoping putting an end to a 33-year freeze in Sino-Soviet relations. However, the visit of Gorbachev recalled to Chinese leaders the deep changes underway in the USSR as well as in Eastern Europe, formerly under Soviet influence.

There were fears within the Chinese ruling circle that such changes might be possible in China due to uncontolled demands from below. There were strong debates between hard-liners and reformers within the leadership as to how to handle the student protests. There were many foreign journalists in Beijing to cover the arrival of Mikhail Gorbachev and so the student protests were becoming front-page news in many parts of the world.

On 20 May 1989, martial law was declared giving the government greater legal right to act against protesters. Arrests started being made. The students responded with greater determination, and protesters from other parts of China joined those on Tiananmen Square.

On 29 May, during the night, students from the Central Academy of Fine Arts assembled a 37 foot-high Goddess of Democracy built in two days of plaster and styrfoam. As the statue was unvailed, a student announcement was made « We have made this statue as a memorial to democracy. » 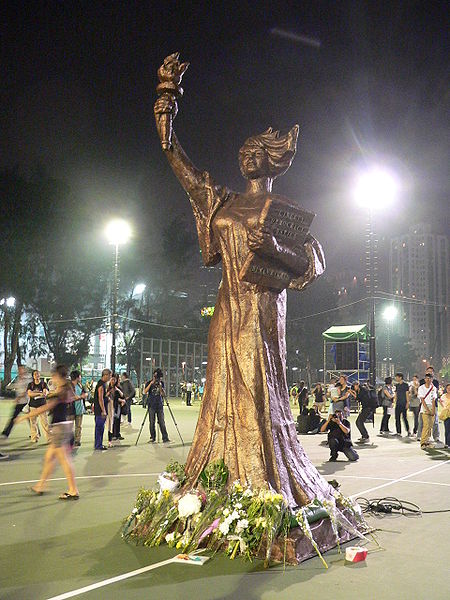 Replica of the statue “Goddess of Democracy” from the Tiananmen square protests in 1989. Photo taken in Victoria Park, Hong Kong, during the commemoration event for the 21st anniversary of the massacre.

The Goddess of Democracy has not been rebuilt.

A Goddess of Democracy whose face was at the same level as the portrait of Mao Zedong was too much for the hard-liners. On the afternoon of 3 June, soldiers started moving into the Square, smashing student barricades. An unknown number of Beijing protesters were killed, succumbing to gunshots or crushed by tanks and armored personnel carriers. More are wounded. « Counter-revolutionary rebellion is now taking place. They aim to overthrow the People’s Republic of China » announced a government broadcast.

At 2 A.M. On 4 June, military transport trucks entered the Square. At 4 A.M. the Goddess of Democracy is toppled by a tank. By mid-morning, the Square is emptied of protesters. Hope for student-led democratic reforms is set aside. On 5 June, a lone man stopped a tank convoy heading for an empty Tiananmen Square along an empty Chang’an Avenue, a vivid image of the power of nonviolence in the face of military threats.

Since 1989, political and economic policy has been set by the political leadership. There have been shifts in policy, many of which have increased economic conditions. These reforms, however, were not articulated by groups of citizens. The Goddess of Democracy has not been rebuilt.