“Hold fast to dreams, for if dreams die, life is a broken-winged bird that cannot fly.” Langston Hughes

Langston Hughes was an African-American poet;  through Negro was the term at the time;  and many of Hughes’ poems have Negro in the title as his “A Negro speaks of rivers”. He was an important figure of what is called “The Harlem Renaissance“ – a strong cultural current in New York City from the mid 1920s to the mid 1940s. (1)

He  was largely raised by his grandmother;  his father having left to live in Mexico and his mother lived else where in order to work. Although Langston Hughes;  as many U.S. African -Americans had white ancestors;  his grandmother stress having pride in being black. Later in his life;  Hughes was called a “Negro Nationalist” but he always considered himself as a Citizen of the World with a special bond to the oppressed.

Columbia is a private elite university

Hughes  spent 1921 as a student at Columbia University in New York City;  but left after one year considering himself as a victim of racism. Columbia is a private elite university; and at the time most of the students and professors were white. However, Columbia is on the edge of the Harlem section of New York City. Thus Langston Hughes got his first views of urban African-American life. He spent most of his working life in Harlem.

However, He continued his university studies at Lincoln University;  a Negro University  near Philadelphia. He started writing poems while at university;  which were increasingly published. He met Vachel Lindsay;  a poet in the style of Walt Whitman;  who used to declaim his poems in theaters and public meetings. Lindsay recognized Hughes’ talent and helped with introductions to editors.

Then Langston Hughes spent a year in Paris;  where he met young university students from Africa and became interested in the culture of French-speaking Africa although;  he never lived there. He returned to New York City and in 1926 became a co-editor of Fire!!, a literary journal for young Negro artists. In 1926 he published one of his best known poems “The Weary Blues” (blues being a form of jazz music). As Hughes wrote “Jazz to me is one of the inherent expressions of Negro life in America; the eternal tom-tom beating in the Negro soul – the tom-tom of revolt against weariness in a white world;  a world of subway trains, and work, work, work; the tom-tom of joy and laughter, and pain swallowed in a smile.” 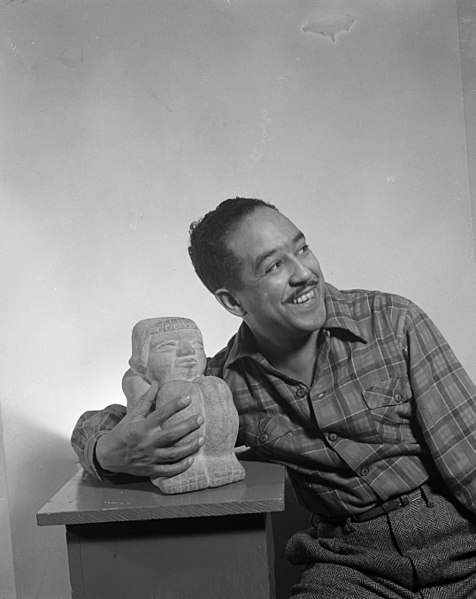 Hughes wrote daily sections- part short story;  part reporting of scenes of daily life of a working class Negro. At the time in Chicago and New York there were widely-read Negro newspapers;  which have since disappeared. His poetry was published largely in Communist or left-wing journals such as The Anvil, The Challenge, The Partisan.

However,  Hughes was never a member of the U.S. Communist Party as such and his writing was non-theoretical.  Communist editors in the 1930s looking for “proletarian literature” found Hughes’ spoken style fitted their need to show oppression of the worker.

As Hughes wrote in “Let America be America Again”
For all the dreams we’ve dreamed,
And all the songs we’ve sung
And all the hopes we’ve held
And all the flags we’ve hung
The millions who have nothing for our pay
Except the dream that’s almost dead today.”

Langston Hughes and his friend Richard Wright who lived most of his later life in France;  were among the most highly visible African-American cultural figures working for what was called “Black Pride” Both were humanists and were unrelated – if not opposed – to churches. Churches were then and remain a crucial element of African-American leadership;  Martin Luther King being a later model. 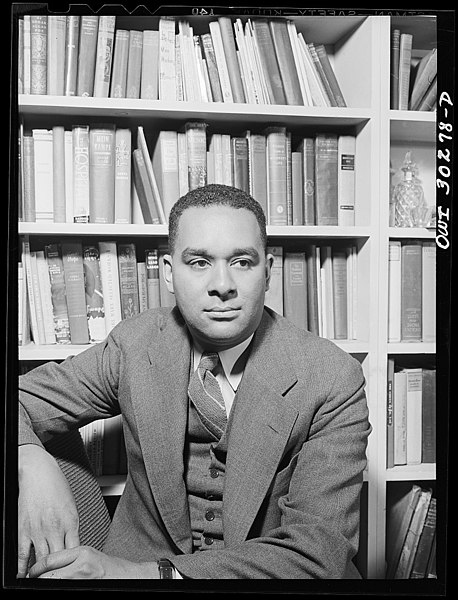 With the coming of the 1950s, the Cold War and an anti-Communist atmosphere often associated with Senator Joseph McCarthy;  most of the Communist – left-wing journals disappeared. Although still young; Langston  Hughes in the public mind was associated with the 1930s and the Harlem Renaissance. He continued to write;  especially letters to friends which have since been collected and published. He was seen as a “father-figure” by the younger generation of African-American activists;  not really as one of them. He followed the model of his early friend Vachel Lindsay and gave many public readings of his poems in universities and other public meetings. His writings merit being known by readers today.

As a biography see the two volume life by Arnold Rampersad The Life of Langston Hughes (Oxford: Oxford University Press, 1986)