L’Abbe Pierre: Voice of the Voiceless

L’Abbe Pierre,  champion of the homeless and world citizen;  died 22 January 2007 in Paris at 94 years old. He was born in 1912 and named Henri Groues. He was brought up in Lyon in a bourgeois family and educated in Catholic schools.

His father was active in helping the poor directly and in Catholic social efforts. As a 15-year old student on his way to Rome for Easter with his school;  they stopped at Assisi, where Henri had a mystical experience alone on the mountain side;  and was ever afterwards influenced by the image of Francis of Assisi helping the poor.

At the end of his secondary school studies, he entered a Franciscan order and spent seven years in a monastery in very demanding conditions — long hours of prayer in the middle of the night, hard physical work and serious philosophical study. His health which was always delicate broke under the strain, and he left monastic life for that of a regular parish priest in Grenoble in the French Alps.

Shortly afterwards;  the Second World War started, and France was occupied by German troops. Henri Groues helped people to flee into Switzerland through mountain passes. The mountainous area where he was living became a center for the armed resistance to the German occupation;  and Henri became an active member, continuing to help people cross the frontier into Switzerland and editing a clandestine news bulletin.

During his Resistance activities;  he changed his name and identity papers often. One assumed name was  l’Abbe Pierre;  by which he became known in the Resistance — a name which he kept after the war.

During his Resistance activities;  he was arrested by the Germans, escaped from jail, made his way through Spain to North Africa;  where General De Gaulle had set up his Free French government in Algiers.

In Algiers, l’Abbe Pierre met De Gaulle and many of the men;  who were going to play key roles in post-war French politics. His dynamism, social conscience and interest in world politics were noted. In 1945, l’Abbe Pierre was asked to run for Parliament in a newly-formed Catholic party;  which needed Catholics who had not been compromised by cooperation with the Vichy government. 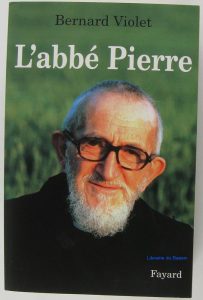 In 1945, he was elected to the first French Parliament and started to play an active political role pushing for socially progressive legislation. He along with Andre Philippe;  a Protestant and Socialist. He had met in Algiers were the first to introduce legislation to recognize conscientious objection to military service;  legislation that did not come into being in France until much later.

He also realized that peace and justice had to be organized at a world level. He became an active world citizen; among the early champions of Garry Davis in Paris in 1948;  where the UN General Assembly was held; and where world citizenship as an organized world movement started.

L’Abbe Pierre was also elected as the chairman of the international world federalist movement;  which had its founding congress in Switzerland in 1947. He always remained an active world citizen;  and that is how we worked together in the mid-1960s in efforts to end the war in Vietnam.

As a member of Parliament but without a family;  he had enough funds to help in social activities linked to the reconstruction of France. He bought a large;  rundown house outside of Paris and started to create a youth center. In his youth;  he had been a boy scout leader and organizer of work camps.

He brought young people to the house to help restore in. In 1949;  a neighbour brought to l’Abbe Pierre a man;  recently released from prison;  who had just tried to kill himself. L’Abbe Pierre said, “Rather than kill yourself, come and help me build.” Thus was born the Compagnons d’Emmaus, a movement for the poor to help those even poorer and in greater need than themselves.

The house of l’Abbe Pierre became a home for men who had not adjusted to peacetime society. They earned their livelihood at the start by picking rags and other objects from the city dumps, fixing and selling. After a while, people started giving them broken objects to fix and sell, but the “rag pickers” were the first popular image of the compagnons.

Then in the very cold winter of 1954, l’Abbe Pierre, who had resigned from Parliament to work full time with the homeless, received national attention. He was asked to participate in a very popular radio quiz show. It was just the day after a mother and her child who were living on the Paris streets had died of cold.

After answering a few quiz questions, l’Abbe Pierre used the possibility of being on radio to give an impassioned plea for all those living on the street and in shacks. His appeal became the first shot in what was called “l’insurrection de la bonte” – the insurrection of goodness. Food, blankets and money flooded in. 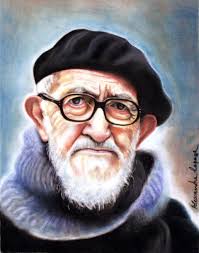 The Parliament which a few weeks before had refused to vote funds for social housing outside areas destroyed by the war, was suddenly pressured to vote funds for social housing. With the money sent to him directly by people; l’Abbe Pierre started building houses in which those who were to live in them participated in the building. L’Abbe Pierre’s philosophy was that people should not just be helped but that they should participate and also help those who were weaker and less fortunate than themselves.

Groups of the Compagnons d’Emmaus spread from the Paris area to all parts of France. Today there are over 100 communities, some 10,000 housing units and a number of off-shoots. The Compagnons have created national groups in some 40 countries, always working with the poorest, especially in the field of social housing.

Shortly after 1954, Africans living in France came to l’Abbe Pierre and asked that something similar needed to be done in their countries. Thus IRAM was born, one of the first organizations to promote popular participation in development, development efforts based on the expressed needs of people and on the training of leaders chosen by the village itself. L’IRAM began work in the mid-1950s in North Africa and then in sub-Saharan Africa. Today, IRAM is considered a leader in promoting rural development under local leadership.

L’Abbe Pierre had the advantage of looking like the role he was to play. He had been given a long dark fire-fighter’s cape by a fireman during his 1954 campaign, which along with a dark beret and a disorderly beard made him recognizable everywhere and a favourite of photographers.

From his days in Parliament and from the Resistance movement, he had kept friends who took on important political roles, in particular Robert Buron, often a government minister who had followed l’Abbe Pierre into the world citizen movement. He also kept good contacts in the press and his appeals for the poor were well publicized.

Although he spoke from the heart, he also had a political organizer’s mind. We came to know each other in 1964-1965. I had recently returned from working in Africa and was teaching on development issues in Geneva, Switzerland. It was a time of growing awareness of the dangers of the war in Vietnam, and there was a hope on the part of some of us that Buddhists could be a “Third Force” in Vietnam.

L’Abbe Pierre came to see me in Geneva along with other persons from Sweden who shared the same hopes. We were seeking contacts with different Vietnamese factions to see what was possible. L’Abbe Pierre worked with us and put both his intelligence and his network of contacts into the effort.

“The Eternal which is Love”

The effort, as we know, failed, but l’Abbe Pierre had great confidence in what he called “The Eternal which is Love” so that no action is a failure if it is done with the right motivation. World Citizens continue in his spirit, a voice for the voiceless and solidarity at the world level.