For many years “conflict resolution”;  was the usual term both in diplomatic practice and scholarly writing. Now we see a change;  at least in scholarly writing to the term “conflict transformation”;  for conflicts are rarely resolved just by compromise and adjustments. Conflicts are moments of high intensity of energies;  which need to be transformed into a radically different quality of flow;  in order to achieve stability and justice.

As John Paul Ledarach points out here;  for years the idea of conflict resolution has been a more widely recognised term than conflict transformation. Yet the term “conflict resolution” carries the idea of ending a given crisis;  while “transforming” implies dynamic and sustained responses;  leading to broad social change and institutions;  for a new constitutional order. This shift is more than just a change in terminology. All changes;  in terms commonly used are a reflection of a change in concepts.

The change is first of all;  due to the realization born of historical experience that conflicts are seldom “resolved”. They keep coming alive again and again through time;  sometimes after periods of relative rest. Today;  we have more examples than we need: former Yugoslavia, Cyprus, Kashmir, and the Sudan among others. Thus; as Kumar Rupesinghe points out in his introduction:

“Given the complexities and the durability of current violent conflicts; the notion of being able to resolve them once; and  for all has been superseded by an understanding; that such dynamic and rooted processes call; for dynamic and sustainable responses.

Conflict transformation; I believe, must be a flexible, yet comprehensive process; by which ultimately a culture of negotiation and accommodation;  displaces a culture of violence and provides ordinary people; with the means to prevent any return to barbarity.”

The intensity of such conflicts requires a broad wholistic approach of analysis;  which takes into consideration the many elements;  which have led to the conflict: political, economic, social, and psychological. Some conflicts stemming from a single grievance escalate; to dominate and absorb most of the energies and resources of the protagonists; and thus involve most aspects of life.

The conflict must be analysed through time; and efforts made to see if elements create a synergy of conflict – that is; if the elements are mutually reinforcing or if, in an opposite way; certain elements mitigate the conflict. When a conflict is at a violent stage; there is an understandable tendency to look for short-term answers.

However;  there is a need on the part of some of those involved in negotiations; to have an over-all integrated perspective; for both short as well as long-term transformation.

Conflict transformation requires both short-term measures to lessen immediate violence; possibly third-party intervention; such as peace-keeping forces;  or mediation to facilitate negotiations between the antagonists. While the authors approach the subject in different ways;  there seems to me to be three key elements which help to structure the whole:

John Paul Lederach deals most explicitly with the need to integrate short-term approaches of negotiations, third-party interventions, peace-keeping measures;  the ability of negotiators to redefine a conflict so as to get some negotiations underway with long-term structural and attitudinal changes; with policies of economic development, policies of empowerment;  and new representational forms such as political parties, a renewed civil society;  and the development of a civic culture based on tolerance;  accommodation and cooperation.

The development of new constitutional orders;  based on strategies of accommodation is stressed By Ted Robert Gurr;  in his important contribution “Transforming Ethno-political Conflicts: Exit, Autonomy or Access?” Gurr looks at five types of arrangements;  which can be used to accommodate autonomist demands;  based on the extent of authority devolved to the communal group: confederalism, federalist, regional autonomism, regional administrative decentralization, and community autonomism.

At each level of government;  there needs to be the development of democratic mechanisms;  institutions and attitudes rooted in accountability to citizens;  and which can maintain the momentum of peace.

All conflict transformation requires new constitutional forms;  and it is in this area that political imagination is urgently needed. Longer-term conflict transformation and the growth of peaceful societies;  require the rooting of peace constituencies, effective civil institutions;  and the development of cultures of dialogue to resolve potentially violent disputes.

Conflict transformation requires deep changes in attitudes;  the development of a civic culture based on accommodation and cooperation. Above all;  conflict transformation requires leaders;  who understand the nature of the conflict but who;  rather than building their power base on an intensification of the conflict;  are willing to lead strategies of cooperation.

The will to conflict transformation must be embodied in identifiable persons;  who can build alliances that link local and national elites;  with international actors in the design, implementation, and long-term sustenance of peace processes. If a leader can activate a constituency for conflict;  then leaders need to be found;  so that the accommodation constituency can also be activated.

This is particularly important in times of violent conflict;  as overcoming civilian passivity is crucial to ending armed violence. 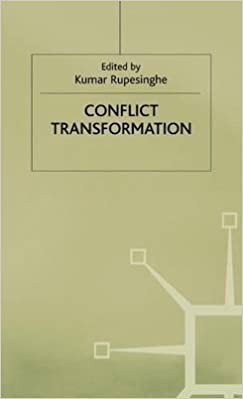 It is Dov Romen;  who most closely associates the need for peace leadership with his analysis of the origins of conflicts. Romen maintains that:

“It is not groups of people – ethnic groups, national or adherents of religions that awake, arise, rebel or demand the right to self-determination: individual human beings do this; in order to attain personal goals…Thus; human beings activate a shared identity – be it a common language, religion, race, gender, social status, economic position, or ethnic origin.

Rather the shared identity is preserved by human beings in order to attain satisfaction of their human need. After a while; human beings might activate another identity from among the other available characteristics and form or join another group; or pursue their personal goals individually.”

Romen goes on to state:

“Thus; my basic proposition is that a leader is indispensable for the activation of identities. Without a leader;  there is also no internal conflict.”

Likewise, without a leader;  there is also no conflict transformation.