Your children are not your children;
They are the sons and daughters of
Life’s longing for itself.
They come through you but not from you.
And though they are with you, yet they
belong not to you.
You may give them your love but not
your thoughts, for they have their own thoughts.
You may house their bodies, but not their souls.
Kahil Gibran

12 June is a red letter day on the UN agenda of events as the World Day Against Child Labour.  It marks the 12 June arrival in 1998 of hundreds of children in Geneva; part of the Global March against Child Labour; that had crossed a 100 countries to present their plight to the International Labour Organization (ILO).

“We are hurting, and you can help us”; was their message to the assembled International Labour Conference; which meets each year in Geneva in June.  One year later, in June; the ILO had drafted ILO Convention N° 182 on child labour; which 165 States have now ratified — the fastest ratification rate in the ILO’s  history.

ILO Convention N°182 sets out in article 3 the worst forms of child labour to be banned:

The Convention is supplemented by a Recommendation: the Worst Forms of Child Labour Recommendation N° 1999 which provisions should be applied in conjunction with the Convention: “Programme of Action (article 6): Among other issues, the situation of the girl child and the problem of hidden work situations in which girls are at special risk are explicitly mentioned; Hazardous work (article 3(d): In determining the types of hazardous work, consideration should be given, inter alia, to work which exposes children to physical, psychological or sexual abuse.

The ILO estimates there of the some 200 million child labourers in the world.

Today, millions of children, especially those living in extreme poverty, have no choice but to accept exploitive employment to ensure their own and their family’s survival.  Child labour was often hidden behind the real and non-exploitive help that children bring to family farms.

However, such help often keeps children out of school and thus outside the possibility of joining the modern sector of the economy.  The ILO estimates that of the some 200 million child labourers in the world, some 70 percent are in agriculture, 10 percent in industry/mines and the others in trade and services — often as domestics or street vendors in urban areas.

Globally, Asia accounts for the largest number of child workers — 122 million, Sub-Saharan Africa, 50 million, and Latin America and the Caribbean, 6 million.  Young people under 18 make up almost half of humanity, a half which is virtually powerless in relation to the other half.  To ensure the well-being of children and adolescents in light of this imbalance of power, we must identify attitudes and practices which cause invisibility.

One of the most exploitive type of child labour is what is called “debt bondage” — most pervasive in India, Pakistan and western Nepal.  In these countries, the debt bondage pattern of exploitation is supported by long-standing traditions and cultural biases against low castes or minority ethnic groups.

Dept bondage is a practice by which parents pledge their children’s work to pay off debts.  The debts are very small at the start but with very high interest rates.  Thus the children may work for their entire childhood to pay off the debt because of fraudulent accounting mechanisms employed by debt holders. 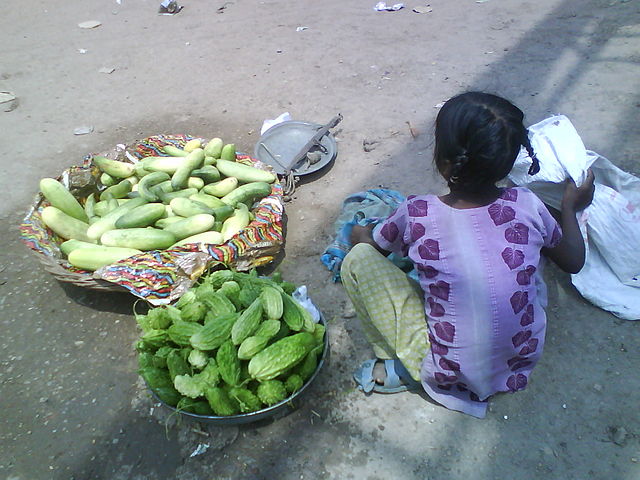 In western Nepal, where such bonded labourers are known as “Kamaiya”, the accounting schemes can keep families in debt for generations.  Since Kamaiyas are often not paid enough to meet their basic needs, many have no choice but to take new loans from their masters.

Many also carry inherited debts, sometimes going back for three or four generations in addition to their own.  Children sold to bond masters work long hours over many years in  an attempt to pay off these debts due to the astronomically high rates of interest charged and the low wages paid.  The eradication of child labour depends on an ethical awakening on the part of employers, government officials, and non-governmental organizations.

In India, child debt servitude has been illegal since 1933.  Since independence, India has adopted a host of additional protective legislation, most importantly the Bonded Labour System Abolition Act of 1976, which strictly outlaws all forms of debt bondage and forced labour.

However, without political will to enforce them, these legal safeguards have little impact.  Whether due to corruption or indifference, the political will is lacking.  Labour laws are routinely flouted with virtually no risk of punishment to the offender.  This is why an ethical awareness must grow and all children seen as having dignity and potential for a fuller life. 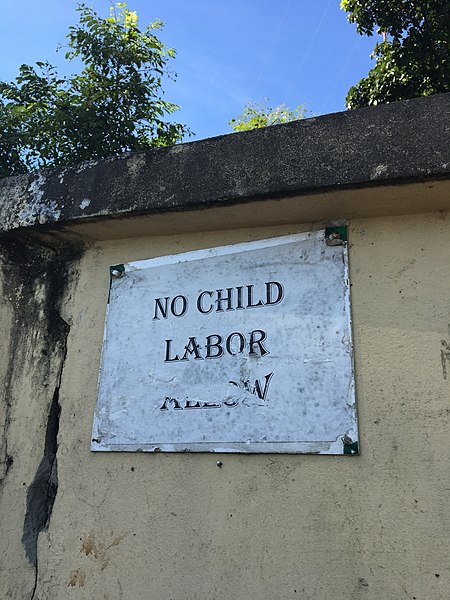 A “No Child Labour” sign in a clothing factory in Bangladesh. By Scotted400, CC0, via Wikimedia Commons.

Child labour is often related to conditions of extreme poverty.

There is still a long way to go to eliminate exploitive child labour.  Much child labour is in what is commonly called the non-formal sector of the economy where there are no trade unions.  Child labour is often related to conditions of extreme poverty and to sectors of the society where both adults and children are marginalized such as many tribal societies in Asia, or the Roma in Europe or migrant workers in general.

There needs to be world-wide labour market policies that provide social protection measures, better training for an ever-changing work scene.

World Citizens support the demands of decent work for all.  We need to cooperate to build economies and societies where young persons participate fully in the present and the future.