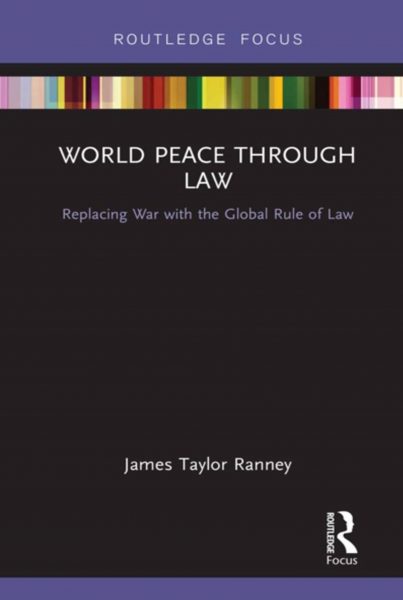 This book deals with the history and future of the concept of ‘world peace through law’ (WPTL), which advocates replacing the use of international force with the global rule of law.

WPTL calls for replacing war with the global rule of law by arms reductions, including the abolition of nuclear weapons, global alternative dispute resolution mechanisms, and various enforcement mechanisms. This book sets forth a three-part proposal: 1) arms reductions – primarily the abolition of nuclear weapons, with necessarily concomitant reductions in conventional forces; 2) a four-stage system of global alternative dispute resolution (ADR), utilizing both law and equity; 3) adequate enforcement mechanisms, including a UN Peace Force. The core of this proposal is alternative dispute resolution mechanisms—international ADR. International ADR would consist of a four-stage process of compulsory negotiation, compulsory mediation, compulsory arbitration., and compulsory adjudication by the World Court. The fundamental proposition of this book is that the use of alternatives to war, global ADR, is the ultimate solution to the problem of peace. The full implementation of WPTL will entail a vast array of progressive initiatives on many fronts, including abolition of nuclear weapons, with the global rule of law being the capstone to all of these developments.

This book will be of great interest to students of peace studies, arms control, international law, and world politics.

James Ranny has written a most useful account of the transformation of international law  toward world law; as a framework of the World Society.  There was a century of the progressive development of international law;  from the first Hague Peace Conference of 1899 until 1947; and the proclamation by the United Nations General Assembly of the Universal Declaration of Human Rights.  The title of the Declaration;  is the mark of the change of perspective.  It is not called the International Declaration of Human Rights;  but the Universal Declaration addressed to States and to all humans.

James Taylor Ranney is a retired Adjunct Professor, Widener Law School, USA. He was a co-founder of the Jeannette Rankin Peace Center, a Legal Consultant to the United Nations International Criminal Tribunal for the Former Yugoslavia, Chair of the Philadelphia Chapter of Citizens for Global Solutions, and is currently a Board Member of the Project for Nuclear Awareness.

–This text refers to the hardcover edition.