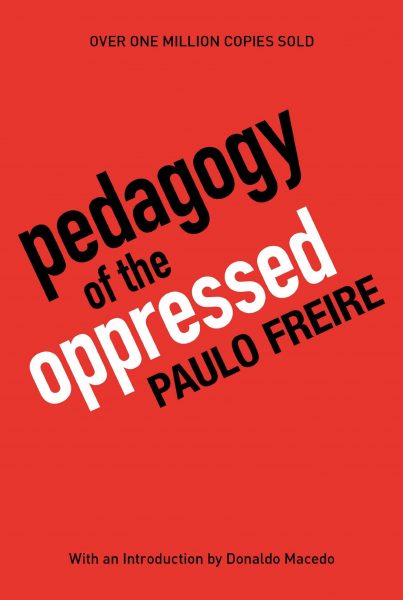 First published in Portuguese in 1968, Pedagogy of the Oppressed was translated and published in English in 1970. The methodology of the late Paulo Freire has helped to empower countless impoverished and illiterate people throughout the world. Freire’s work has taken on especial urgency in the United States and Western Europe, where the creation of a permanent underclass among the underprivileged and minorities in cities and urban centers is increasingly accepted as the norm.

With a substantive new introduction on Freire’s life and the remarkable impact of this book by writer and Freire confidant and authority Donaldo Macedo, this anniversary edition of Pedagogy of the Oppressed will inspire a new generation of educators, students, and general readers for years to come.

“Participation”  is a term that is often used in three different ways.  It is sometimes used;  as in much agricultural extension activities;  as induced from above by some authorities;  who usually seek some social control over the process.  Such State-promoted participation usually aims at getting people to produce more effectively.  This is not popular participation in the sense that the Basic Needs Approach uses the term “participation”;   although in practice State cooperation is usually needed.

“Participation”  in the Basic-Needs – inclusion of the marginalized sense – springs from below during a crisis;  and in response to some threat to a community’s values or survival.  Often with no prior plan or precedent;  some hitherto passive group mobilizes itself to protest, to resist, to say “No”.  As the world citizen  Albert Camus wrote,

“Any oppressed group’s refusal to accept its conditions is always the latent bearer of all affirmations of possible new orders.  To say “no” is to open up possibilities for saying “yes” in a multitude of ways.  Those who begin by saying “No” to their oppressors soon feel the need to utter some “Yes” of their own.”

Paulo Freire is the author of the bestselling Pedagogy of the Oppressed as well as Education for Critical Consciousness, Pedagogy in Process (The Letters to Guinea-Bissau), Learning to Question (with Antonio Faundez), and Pedagogy of the City. –This text refers to the paperback edition.
Shop by Amazon
<< return to products