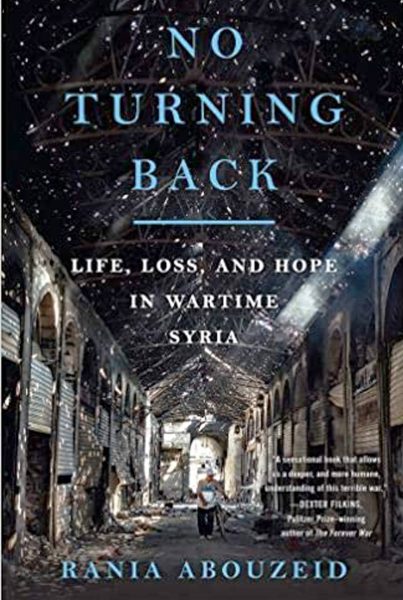 The title of the book No Turning Back is a strong image of the avalanch that is armed conflict.  Once the violence starts;  there is no turning back.  One can only discuss “what is next?”;  once one has reached the bottom of the maintain.

We seem to be near the end of the avalanche;  and reaching the bottom of the mountain in Syria.  With Russian-Turkish cooperation in northeast Syria;  and with the possibility of a “Constitutional Committee” that would slightly increase the support base of the Al-Assad government to meet in Geneva;  most possibilities of the future have been set out.  The cost in the lives of people is well set out in the book. The reference to “Hope” in the title is less obvious;  but it is a book well worth reading.

No Turning Back: Life, Loss and Hope in Wartime Syria is a moving book by the Lebanese journalist Rania Abouzlid. As an Arabic speaker;  she was able to move in Syrian society  to interview a range of Syrians caught up in the violence.  She was also able to interview Syrian refugees in Turkey, Jordan and Lebanon;  sometimes the same persons that she had interviewed first in Syria.  As a writer for U.S. journals; she was also often in the USA;  and so was able to follow the evolution of U.S. policy toward the Syrian conflict (to the extent that there is a policy.)

“Syria has ceased to exist as a unified state except in memories and on maps.  In its place are many Syrias.  The war there has become a conflict where the dead are not merely nameless;  reduced to figures.  They are not even numbers.  In mid 2013;  the United Nations abandoned trying to count Syria’s casualties due to the difficulty of verifying information;  although estimates put the death toll at well over 500,000 people.  Half of Syria’s population of twenty-three million is now displaced.  No life is inconsequential.  Each is a thread in a communal tapestry; holding the larger intact.”

Rania Abouzeid has won the Michael Kelly Award and George Polk Award for foreign reporting, among many other prizes for international journalism. She has written for The New Yorker, Time, Foreign Affairs, Politico, the Guardian, and the Los Angeles Times. A former New America fellow, she lives in Beirut, Lebanon.