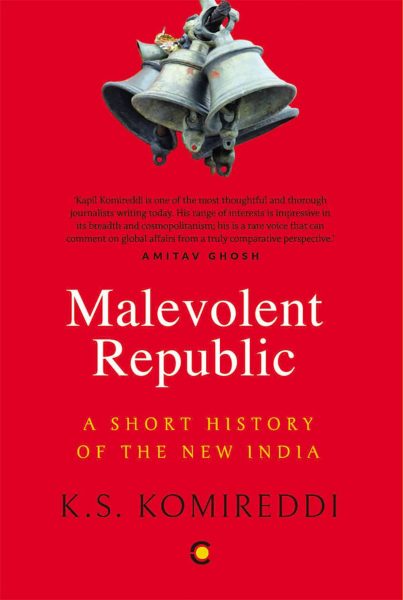 This is a lively analysis of Indian politics;   since independence.  The book is divided in two parts;  an account of the long period  when the Congress Party was in power;  and a second part on the values and activities of the government;  led by Narendra Modi.

Komireddi’s views on the Modi Government are Clear.

“We inhabit the most degraded moment in the history of the Indian Republic;  the culmination of decades of betrayals;  the eruption of a long-suppressed rage.  But the good thing about bad times is that they force us to reflect;  to see clearly.

The past five years have shattered so many illusions;  dispelled so much fog.  We can begin to accept how we arrived here: a via Dolorosa lined with corruption;  cowardly concessions to religious nationalism;  demeaning bribes to the minorities;  self-wounding distortions of the past;  and  wholesale abandonment of the many for the few.”

“There wasn’t a shadow of resistance as Narendra Modi stormed Delhi in the summer of 2014.  After six decades of faltering secularism;  India yielded spectacularly to the Hindu nationalist  insurgency…Modi was the hand grenade hurled;  by all those who had been sneered at, stamped upon, marginalised;  subjected to cultural condescension and objectified for anthropological amusement;  by the preening cast of English-speaking elites fostered by India’s venal secular establishment.”

Modi did not come to power in a harmonious and peaceful country.  Rather;  earlier governments had not met the challenges presented by economic, religious, and geographic divisions.