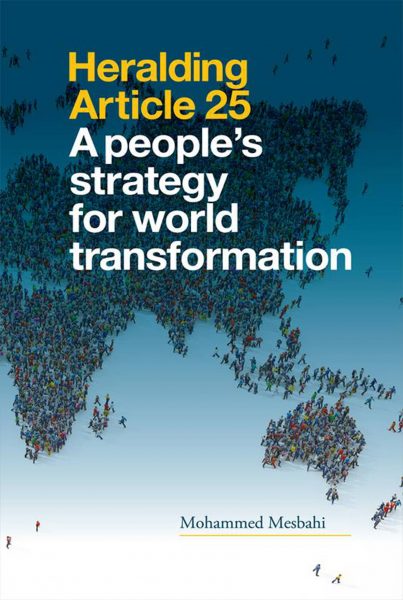 In this pioneering analysis of world problems, Mohammed Mesbahi argues that meeting the basic entitlements outlined in Article 25 of the Universal Declaration of Human Rights – for adequate food, housing, healthcare and social security for all – is imperative for the survival of humanity in the 21st century. But after so many years of political inaction, only the massed goodwill of ordinary people can bring about an end to poverty in a world of plenty through enormous, peaceful and continuous protests across all countries. The line of enquiry pursued in Mesbahi’s five-part study is concerned with how to galvanise these unprecedented global demonstrations on behalf of the poorest members of the human family, millions of whom are needlessly dying as each year passes.

Central to the book’s unique discourse is a set of instructions for engaged citizens and the youth who are encouraged to lead the way in forging a huge united public voice, one that has the potential to reorder government priorities and empower the United Nations to truly represent the people of the world. Through a graceful and often poetic prose, the reader is guided to investigate the question of world transformation from psychological, moral and spiritual perspectives, as well as from a broader political and economic analysis. As Mesbahi elucidates, we ultimately need a new education that can equip the citizens of every nation to think in terms of the ‘One Humanity’, with a universal understanding that the principles of sharing and cooperation are the foundations of a sustainable global economic system.

For the time has come when we must demonstrate in our millions not against this or that;  but on the basis of the goodwill and compassion that defines who we truly are. For within each and every human heart is embodied the love of wisdom of all humanity.

Global economic change for a better world  by ending poverty and hunger;  and implementing a basic needs development framework;  also requires an  inner transformational change within individuals on a collective and mass scale.  The  author calls for a worldwide awakening of compassion and empathy;  toward the poorest members of the human family;  millions of whom are needlessly dying each year.

The Basic Needs approach is set out in Article 25 of the Universal Declaration of Human Rights.