The Challenges of the NGO Peacebuilding 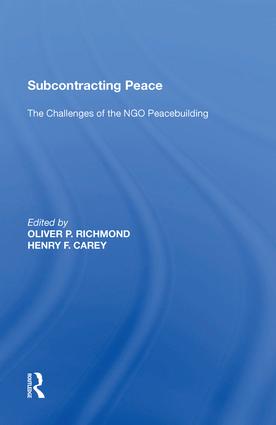 The Challenges of the NGO Peacebuilding (Aldershot: Ashgate Publishing, 2005, 267pp.)

As Kim Reinann writes in this useful overview of non-governmental organizations (NGOs) in the peacebuilding field “In the past two decades, the number and influence of NGOs has grown dramatically, leading many scholars and observers in recent years to argue that a paradign shict has taken place in politics and international relations theory.

While the tone of much of the literature on NGOs has been positive and has presented them in a progressive and idealistic light, the rise of NGOs has not been without controversy or critics.

As NGOs have grown in size and influence, their actions have come under much greater scrutiny… “During the course of the 1990s and early 2000s, a clearly defined set of critiques of NGOs have appeared focusing on:

The rise of NGOs

These critiques are worth looking at and will serve as a framework for this review. However, it is worth looking at the roles that NGOs try to play in the peace building field and why there has been the increased growth in activity.

The rise of NGOs such as the Association of World Citizens as important agents in conflict resolution and post-conflictdevelopment efforts comes from the changing nature of conflicts.

During the Cold War years(1945-1990), governments were the chief actors. NGOs could give advice on disarmamemeasures, on the resolution of certain conflicts and could provide the setting for some TrackTwo informal meetings. On some special issues that were not directly security related such asthe Law of the Sea negotiations or the first UN environmental meetings, NGOs already had asignificant input.

However, even during the Cold War years, in certain areas, especially Africa, we saw the rise of non-state armed forces such as the first civil war in Sudan(1956-1972), the different rebellions in the former Belgium Congo, the Viet Cong in South Vietnam.

The World Council of Churches.

Governments were unable or unwilling to deal with such non-state actors. Much of the negotiations which brought an end to the first Sudanese civil war in 1972 was carried out by the African Conference of Churches and the World Council of Churches.

There are also cases in which the government controlling the territory is suspect and some government s are unwilling to work with it. I was involved in the early 1990s in helping to set up child welfare and educational programs through a NGO as the Vietnamese-backed

Cambodian government was not recognized by some governments and was suspect for others. It was only later that a massive UN-led effort was made in Cambodia. Under UN leadership,

NGOs, the Cambodian government and national government programs cooperated to restore the country after war, genocide, and the failure of Vietnam to undertake development efforts for the government it helped to put into place.

The US Government and the European Union

Today, we see the same debates in the US government and the European Union concerning a Hamas-led government in Palestine. There is current talk of funding through NGOs so as not to deal with Hamas, considered by some as a terrorist organization.

NGOs are thought to have speed, flexibility, relative cheapness, high implementation capacity, and lack of bureaucracy. They are also relatively independent from governments, often made up of multinational teams. There is also disillusionment with the role of states in constructing peace in conflict zones — governments are always suspected of acting for narrow self interest.

NGO strengths can also be weaknesses

However, NGO strengths can also be weaknesses, and as Kim Reinann suggests, it is important to look at performance and effectiveness. It is also necessary to look at government-organized activities in the same places and in the same fields.

I would suggest that each situation presents difficulties linked to history, culture, the current distribution of local power and thus governments and NGOs face the same difficulties. NGOs cannot use the police or the military so they must depend on discussion and material rewards.

Performance and effectiveness depends in large measure on the quality of the persons working for peacebuilding NGOs, and thus is an issue of experience and training, background knowledge of the area in which one is working, and the organization’s ability to get information and supplies to workers in the field. Much also depends on relations with national and local authorities, local NGOs and others having local influence.

National military are always on hand

Moreover NGOs cannot have staffs who only wait for a crisis to arrive. National military are always on hand. To meet a new crisis, NGOs have to find people who have worked for them before or for likeminded NGOs. Many such people have jobs and families and cannot ‘drop everything’ to respond to a call. Thus, there is a need for wide and up-to-date NGO networks of people with the needed skills.

The number of people who know the history and culture of the eastern part of the Democratic Republic of Congo (probably the most difficult current conflict situation) are limited and rarely in one place.

Fortunately, there is a growing number of university-based peace studies programs that can be helpful in training. Kim Reinann has also raised the issue of autonomy — that is the way in which NGOs can prevent being manipulated by their governments and yet cooperating when governments undertake useful initiatives. There is a useful chapter on NGOs and the peace efforts of Norway by Ann Kelleher and James Taulbee.

Norway is known for having played a leading role in brokering the Oslo accord in the Israel/Palestine conflict as well as being active in Latin America —Guatemala and Colombia — and especially Sri Lanka. As Kelleher and Taulbee write “ As a peacemaker, Norway sprang suddenly from amid the confusion associated with the reshuffling of international roles after the Cold War. A relatively small, homogeneous population that enjoys a high standard of living has produced a highly educated, closely connected governing circle whose members move easily between public, private and semi-official roles.

The Norwegian domestic political process emphasizes consensus creation rather than confrontation. Norwegians are accustomed to the time consuming process of sorting out strongly held convictions and dealing with shifting coalitions of interests.

They consider their consensus- building political style as aptly suited to the ambiguities and uncertainties of peacemaking.” Because there are exchanges of people between NGOs, especially church-related, academic life and government in Norway and because Norway has no Great Power interests, it is easy for NGOs in Norway to cooperate with the government in peace efforts as full partners, not as manipulated agents of government policy. We have similar conditions in Sweden and Switzerland — thus the important role that NGOs from these countries play in NGO peacemaking efforts.

NGOs is a crucial question

Resources for NGOs is a crucial question. Fundraising from individual givers helps strengthen NGO independence, but it is time-consuming and expensive. In an analysis of NGO activities in rebuilding Rwanda, Joanna Fisher writes “NGOs may be benefiting their own image rather than that of the populace that they serve; they plan strategically ar time so as to worry more about proving their worth to get funding instead of worrying about if those helped can survive in the long-term after NGOs leave.” Accepting money from governments poses problems of independence from government policy but can also be useful.

Getting projects off the ground requires funds which NGOs do not usually have in reserve. We can agree with the editor Henry Carey in his conclusions “NGOs have a vital role in supporting societies emerging from conflicts, half of whom are relapsed old conflicts where earlier efforts at peacebuilding and prevention have failed.

Greater assessments of best practices and lessons learned about the vast growth of NGO activity, both acting independently and in partnership with the UN, is needed… Finally, more investigation of how to empower local NGOs which still depend on external resources in most cases, needs to be undertaken.”