The Association of World Citizens participates actively in the UNESCO-led International Decade for the Rapprochement of Cultures (2013-2022).  The rapprochement of cultures requires dialogue at many levels.  We are at a time of major change in history.  The accelerating pace of change in the political, social, economic and cultural areas has created new opportunities for dialogue; as the world is inexorably being transformed into a global society.

It is true that to an unprecedented degree people are meeting together in congresses, conferences, schools and universities all over the globe.  However;  in itself such meetings are not dialogues.  There is a need to reach deeper  levels.  One approach is to look at writers;  who in their work drew on more than one culture;  and provided a bridge for meaningful dialogue and the rapprochement of cultures.

Aimé Césaire’s contribution to the rapprochement of cultures is due to his poetry and his plays – all with political implications; but heavily influenced by images from the subconscious. Thus it was André Breton (1896-1966) writer and ideologue of the Surrelists;  who saw  Césaire as a kindred spirit.  Breton often projected his own ideas on to African culture;  seeing it as spontaneous and mystical when much African art is, in fact, conventional and material.

Nevertheless, Breton;  who spent some of the Second World War years in Martinique;  was able to interest many French writers and painters in African culture. It was Breton; who encouraged Jean Paul Sartre to do an early anthology of African and West Indian poetry –Black Orpheus- and to write an important introduction stressing the revolutionary character of the poems.

Aimé Césaire was a Matinique poet and political figure; a cultural bridge builder between the West Indies, Europe and Africa. A poet, teacher, and political figure, he had been mayor of the capital city, Fort-de-France for 56 years from 1945 to 2001;  and a member of the French Parliament without a break from 1945 to 1993 — the French political system allowing a person to be a member of the national parliament; and an elected local official at the same time. First elected to Parliament as a member of the Communist Party;  he had left the Party in 1956;  when he felt that the Communist Party did not put anti-colonialism at the center of its efforts.

The Communist Party’s position was that colonialism would end by itself; once the workers had come to power. Aimé Césaire went on to form a local political party;  which existed only in Martinique and was largely his political machine for creating municipal jobs.

Aimé Césaire faced a massive rural to urban migration on the 400,000 person West Indian department of France. One answer to unemployment was to create municipal posts largely paid for from the central government budget — a ready pool of steady political supporters. Césaire also did much to develop cultural activities from his mayor’s office—encouraging theatre, music and handicrafts.

Aimé Césaire’s parents placed high value on education — his father was a civil servant;  who encouraged his children to read and to take school seriously. Thus;  Césaire ranked first in his secondary school class;  and received a scholarship in 1931; to go to France to study at l’Ecole Normale Supériéure — a university-level institution; which trains university professors and elite secondary school teachers.

He was in the same class with Léopold Sédar Senghor and Leon Damas from Senegal. They;  along with Birago Diop also from Senegal;  started a publication in Paris L’étudiant noir (The Black Student);  as an expression of African culture. One of Césaire’s style in poetry was to string together every cliché;  that the French used when speaking about Africa; and turning these largely negative views into complements. Thus;  he and Senghor took the most commonly used term for Blacks ,Nègre;  which was not an insult;  but which incorporated all the clichés about Africans and West Indians;  and put a positive light upon the term.

Thus; negritude became the term for a large group of French-speaking Africans and French-speaking West Indians – including Haiti – writers. They stressed the positive aspects of African society; but also the pain and agony in the experience of Black people; especially slavery and colonialism. 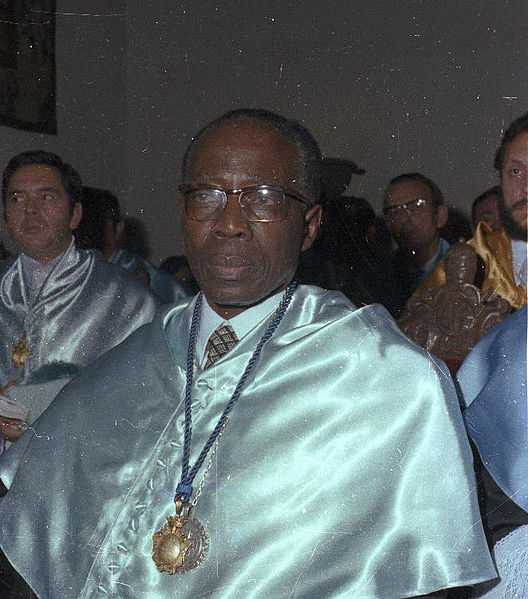 Notebook of the Return to My Native Land.

In 1938; just as he finished his university studies; Aimé Césaire took a few weeks vacation on the coast of Yugoslavia. There he wrote in a burst of energy his Cahier d’un retour au pays natal (Notebook of the Return to My Native Land); his best known series of poems. In 1939;  he returned to Martinique having married another teacher from Martinique;  who was also trained in Paris. Both started teaching at the major secondary school of Martinique and started being politically active.

However, by 1940;  Martinique was under the control of the Vichy government of France and political activity was firmly discouraged. Thus;  Aimé Césaire concentrated on his writing. He met André Breton;  who spent the war years in the USA. Breton encouraged an interest in the history and culture of Haiti. While Haiti is physically close to Martinique;  Haitian history and culture is often overlooked — if not looked down upon — in Martinique. Césaire wrote on the Haitian independence leader Toussaint L’Ouverture as a hero;  and later a play in 1963; La Tragédie du roi Christophe largely influenced by the early years of the dictatorship of Francois Duvalier.

A Leading Voice of African Culture.

With the end of the Second World War; the French Communist Party had one third of the seats in the Parliament of the newly created Fourth Republic. The French Communists were looking for potential candidates from Martinique; where the Party was not particularly well structured. They turned to young; educated persons who had a local base.

Césaire; with his Paris education and as a popular teacher at the major secondary school fitted that bill. He was elected the same year both to Parliament and to the town hall. When in Paris; he took an active part in cultural life; especially with African students and young intellectuals. In 1947; along with the Senegalese Alioune Diop and Senghor; he founded the journal Présence africaine; which later became a publisher of books and a leading voice of African culture.

In the 1960s; Césaire turned increasingly to writing plays; especially on the history of Haiti; as the earliest independent State of the West Indies.  These were voice plays as the actors’ dialogue were nearly peoems. As the French African colonies became independent in the early 1960s; he stressed that the end of colonialism was not enough; but that colonial culture had to be replaced by a new culture, a culture of the universal, a culture of renewal.